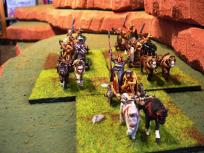 I thought I didn't have enough figures painted to qualify for 1,000 points but when I actually calculated this, I had to make a few changes to get it down to 1,500. Those heroic guys sure eat up a lot of points!

This list is built on the premise that my naked warriors qualify as fanatic while the rest are regular warriors. I actually have a full Foundry cavalry horde waiting to be painted. Once done that will push this list into 2,000 point range. A few extra standard bearers and musicians stand in for regular warriors and a few armored nobles reinforce the lines without any extra game effect.

You could argue that the warrior blocks are too large already. But if you split them up into three blocks, they end up a tad too small. As I already have extra command figures, I think I'll do this after I paint the eight freebie warriors I got with the cavalry horde.

I actually have an extra druid model ready to play, but the list only allows for one. I guess after reaching 2,000 points I could split this into two 1,000 point lists and play British celts vs. Gauls or something.

There are many ways to trim this list down to 1,000 points. I would probably start with dropping the chariots and some characters. Downgrading the fanatics to regular warriors is also an option. You could also play with using the original mixed weapons rule instead of the one in Fall of the West though this makes warrior blocks slightly less effective (but cheaper).

Nevertheless, one thing is sure: This army has balls.

Update: I actually go the cavalry horde painted a while back. Just didn't get around to updating this list. I need to redo this for the new edition of the rules anyways... Here are some pictures of the cavalry: