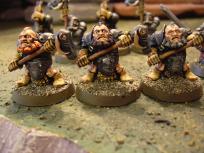 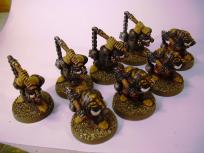 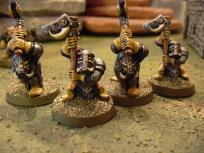 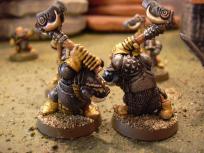 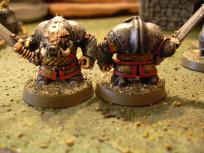 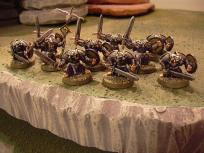 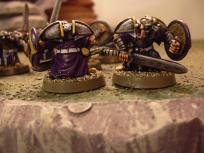 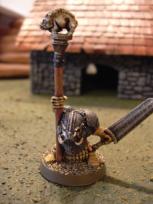 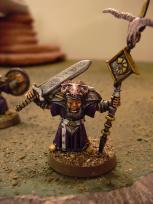 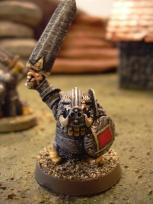 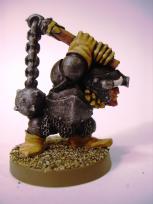 It is intriguing in a way that I painted these guys at all. Dwarves must be my second least liked Chronopia army, right after the boring chaos-clones that are the Devout. I like some of the figures, and I picked the ones I like to paint this time, but in general the dwarf figures never really impressed me. It was only because a friend of mine painted a bunch but not enough for a fully legit list. So I painted a set of Dark-Stars pretty quickly to fill out his list. Then I just decided to boost my set to a full list, dug up enough stunties and went at it. Out of all the dwarf clans, I gotta say I like the tuskies most. The little piggies are just so endearing. Ironically the Dark-Tusk Totem, one of the Chronopia figures I like the most, is one of the few I don't have. I curse myself for not buying it back then... Did I really need to buy 32 identical blood axe warriors? No.... but the totem I failed to buy...

The Foundry/Dallimore 3-color expirements continue with this set, but it is leaning more towards a hybrid style. You will note the tabards of the horny ones are done with a classic inkwash/drybrush rather than 3-colored. Though I do lack a proper color set for purple, the real reason is that this is just plain faster. 3-color is fast if you're doing a single figure, or if you absolutely must finish stuff in a single sitting. But doing batches of similar figures in 1-2 hour stints like me, the drying time for the wash isn't really a factor. I'll typically leave the wash as the last stage each night. But I must say I really like 3-color for flesh, and I think I'm getting better at it. Maybe I'll dare to try those barechested celt warriors next...