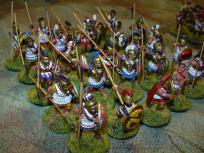 Rather incredible coincidence: I started making this list, counted all my figures and listed them under appropriate heading with basic options. Then I counted the total cost figuring I'd have to slip in a few non-visual improvements to get a good round total value. Nope. 1,500 points exact. Job done. I guess those six freebie greeks Black Tree sent me last year really made this army.

There aren't a lot of ways to tweak this list for 1,500 point games, but for 1,000-pointers you could drop the Spartans for a generic city state force, or downgrade Spartans to regular hoplites and drop everything else except the general for a very one-dimensional force or... It might be a good idea to split the big hoplite block in two, but I don't have any more musicians.

This could also be easily transformed into a Greek Mercenary list from Alexander, except for the javelineers and archers who do not have shields. The greek mercenary list does not allow shieldless psiloi.

The army isn't completely WYSIWYG as some figures don't have the correct equipment. E.g. there are four unarmored hoplites mixed in. Rather than having a bunch of widowed figures unable to join any unit, I based the unit stats on the majority of figures in the unit. If someone has a problem with this, I don't really need to play with them.

The infantry basing is also non-standard. But as 1" washers actually put me at a slight disadvantage, I doubt most opponents would mind. Unless they're just looking for a way to get me disqualified, which is another case of "I don't really need to play with these guys."

Update: I had 24 of Foundry's "army-style" hoplites lying around for a long time that I finally painted up, mostly to test Tamiya's gray wash. Worked pretty well. Also noticed that there's a new version of Warhammer Ancients and everyone's moved to that. So I guess I have to buy the rules yet again and recalculate the list. With some luck I might even make 2,000 points. Oh, and inventorying the figures I found two more trumpet players. Apparently I had prepared for expansion at some stage. Here's a couple of pictures of the new figures: