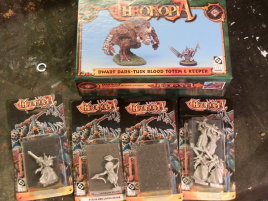 Lead rot. We've all heard about it. It's the bogeyman looming behind the corner, threatening to take away all our precious figures and nullify hours upon hours of labor spent painting them.

But who has actually seen lead rot in action? For the longest time, I really had not. I had a few old metal figures that were maybe a little dull, but nothing actually eating away at the physical details. Sometime a little bit white dusting, probably actual lead oxide, but nothing that couldn't be quickly brushed off before painting. But then that changed.

I had heard rumors about lead rot plagueing the old Chronopia figures, but that didn't stop me stocking up on them when Prince August was clearing them out. Among the several figures I bought, I finally encountered my first examples of clearly identifiable lead rot.

Disclaimer on the nomenclature: Some may say that what I am describing here is not actual lead rot. That may well be, depending on your definition of lead rot. Quite frankly, lead rot is not a scientific or technical term. For the purposes of this article I will arbitrarily define lead rot as any decay or corrosion that develops in long term storage and negatively affects metal figures. It may be that there are more types of this vile plague out there. I am not speaking theoretically here. I wrote this to talk about what I encountered and how I dealt with it. 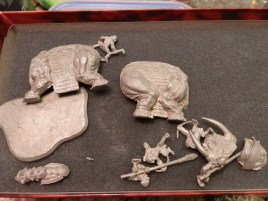 A couple of the boxed sets I bought contained figures with clear disfiguration caused by some sort of decay. I never saw it on any of the figures in blisters, and only part of the boxed sets were affected. I wondered why this would be...

In various theories about lead rot lack of air circulation is named as one of the culprits. I can't claim to be an expert on the chemical processes involved, but I can vouch for my experience:

All the cases of lead rot I have seen were present in shrink-wrapped boxed sets.

It seems to me that the shrink-wrapping has trapped the models in a sealed environment with something they do not like. It could be something coming off the foam inserts in the boxes, it could be just regular air. But the other boxed sets did not show the symptoms even though some of the metal parts were in sealed ziplock bags. One of the affected sets was all metal parts, one was metal/resin hybrid kit. 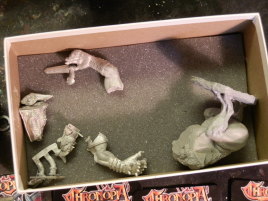 Since these models were old stock probably from the 90's, they had had a long time, over a decade, to develop the symptoms. I have a lot of figures that old that never had any problems -- possibly because I never could resist the temptation to open the boxes straight after buying them, even if they were only to join the ever-growing pile of lead. I may have unwittingly saved myself from huge problems... or not, depending on how you want to look at it.

Faced with the reality, I had basically two choices: dump the models or try to do something about it. To decide, I chose one kit and took a closer look at what I was actually dealing with.

As you can see, there was a rough dull gray growth on the parts, looking almost like fungus. This stuff was actually pretty hard, it did not flake it, it did not brush off and by the looks of it, it was spreading.

This obviously leads to two questions:

Let's start with the first issue. It was immediately obvious that any amount of huffing and puffing was not going to do it. This would have to be physically removed and the damages fixed. There's been good results with acid baths in dealing with rusted car parts and such, but they depend on getting the strength of the acid right so it will eat the rust but not the healthy metal. I wasn't too keen on trying my hand at that, so I chose to pursue mechanical means.

I didn't have a whole lot of parts to deal with, but I'm not a big fan of cleaning models to begin with and I was interested in methods for dealing with large quantities of affected models, should such a calamity befall one. I was also interested in finding the minimum force required to remove the decay, because obviously any physical removal method runs the risk of damaging details on the model.

Thus I started with a tumbler and some corn media. I happen to have one for polishing brass cases, but they are relatively inexpensive and readily available. I plopped the parts in the tumbler and let it run for about five hours, which is what I normally use for brass. Here are the results.

Some of the parts were pretty much okay after tumbling, others were better but still not acceptable. In this case the larger parts came out better, but I think that has more to do with the extent of the rot before tumbling rather than the size or weight of the parts. They are all heavier than the brass cases I normally run through the tumbler.

Tumbling did dull the sheen on the parts (I did not use a polishing agent), but I don't think it affected any actual surface detail that would still be visible after painting. After all, we are all used to minor imperfections in the metal that will be covered by a coat of paint.

Time to take it up a notch and bring in the old elbow grease. I took out my wire brushes and started working on the parts. Wire brushes, especially used with force, are not precision tools in this context. Thus I started with the brass brush to minimize unnecessary damage and worked up to the steel brush only where necessary.

The brass brush was enough to finalize the parts that already were in pretty good shape after the tumbling. It did help on the other parts as well, but it was not enough to fix them. The steel brush went further, but the damage on the worst parts was just too tough.

When all else fails, it's time to whip out the trusty old scalpel. I simply attacked the rot and cut it away as if had been a particularly heinous mold line or other casting imperfection.

The scalpel managed to cut away the rot, but it also became very evident that the rot was not something on the metal, it is the metal. The rot seems to eat away the surface detail and transforms it into this weird growth. Cutting it away can save the part but the detail is lost forever.

This was all hard work, but very much doable. The big question was ofcourse whether this had all been in vain? Would the rot just return? Would the rot seep from under a paintjob and ruin hours of work?

There was only way one to find out, and no easy way around with no TARDIS in sight. I would assemble the models, prime the parts and set them aside for a reasonably long period to observe if there was any signs of the rot returning. Initially I intended to wait for six months, but things happened as they are wont to do and a little over a year passed.

Success! I could detect no signs of further rot. There was no bubbling, no flaking of the primer, nothing untoward. Even on the very smallest parts where I was unable to remove the last few bits of rot, there were no signs of it spreading any further. Seems a wiff of primer sealed the problem away for good.

Based on this experience I can only conclude that lead rot very much resembles rust on iron-based metals and it can be treated in very much the same fashion. The first item is to fix the environmental conditions causing the rot. This can be as simple as ripping off the shrink wrap from your boxes.

Then the rot has to be removed until only healthy metal remains. Various physical methods can be used depending on the extent of the damage and available tools. In some cases it may be easier to cut off affected parts completely and to replace them with new parts.

And finally the parts should be protected against any further rot. A simple coat of primer seems to suffice. The rot does not seem to be a self-sufficient process, it needs certain environmental conditions and once contact with those is eliminated, it does not spread any further.

Well, I had to paint the thing to see there really were no further issues. Here are some pictures of the finished product.