My So Called Progress As A Painter

I just realized that next year it's 20 years since I started with the miniatures hobby (that's ignoring toy soldiers and model kits I did as a much smaller child - as any metal addict knows, plastic doesn't count). As this anniversary draws near, I took a look at all the things I've done over the years and composed this retrospective to display how my painting has, ahem, progressed over the years, how my style and techniques have changed and so on.

In other words, very boring stuff. But if you have nothing better to do, read on. Weeping optional, though recommended.

Everything started in 1985, when I spent three weeks on a "language course" (yeah, right, I actually scored lower on the final exam than the entry exam) in sunny Hastings. Or, to be precise, St. Leonards on Sea, though I never managed to figure out where one ended and the other began...

There, I discovered role-playing games. But to cut to the chase, I also discovered fantasy miniatures to go with the games. At the time, neither was easily available in Finland, so I splurged my allowance and bought as much stuff as I could. This probably included all of twenty miniatures or so, a goodly portion of them Citadel Lord of the Rings miniatures (yes, they held the license in mid-80's - funny how these things go round and round).

Never brought any paints with me, though. I had some of the venerable Humbrol paints left over from plastic kits, so I never figured I'd need anything else. 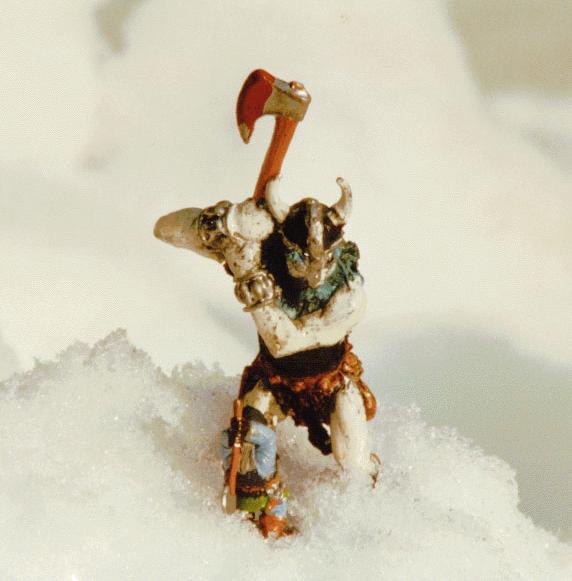 The results were nothing to write home about, as you can see from this photo. I had read about some advanced painting techniques such as washes and drybrushing, but my attempts at these were largely failures. The enamels I used did not take ink washes well and my drybrushing rarely was dry enough. Besides, I was just starting out, so I was happy if I managed to splash the colors in the right spots at all without making too much of a mess.

Many of the figures from this era were later repainted when my output momentarily exceeded my capacity buy more figures.

Distinguishing Marks: During this period, I thought all weapons looked so much cooler if they were encrusted with blood. Thus, virtually every weapon, whether sharp or blunt, got a liberal dab of red paint. Also, the color of the bases was deemed to be a minor detail, so I might have orcs on neat sky blue bases.

Figures: Mostly Citadel and Grenadier, as these were locally available.

Then I managed to get a copy of Citadel Journal in my grubby paws. The skaven were just released and master Blanche himself wrote an article exploring ways to paint the furry critters quickly. As all my previous experiments with washing had been failures, I took an immediate liking to this technique I dubbed the double drybrush method. The idea is very simple: Simply paint the base in darker tone, then drybrush two successively lighter tones on top. In fact, it's pretty close to the vaunted Foundry/Dallimore method, except that it uses drybrushing (which is a mechanic skill) as opposed to painting (which requires actual ability to see where the highlights are supposed to go). 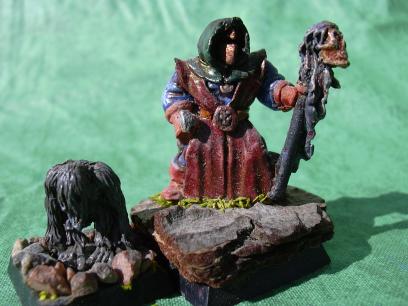 For someone completely without color sense, the handy chart of shades to use was heaven-sent, and I went on to create some of the figures I still consider to be among my best achievements. However, this was to be shortlived as soon I discovered a completely new medium...

Distinguishing Marks: Elaborate, if quirky, bases. I did bases with big pieces of treebark, bases with individually glued scales of a pine cone, bases made from cardboard floorplans... 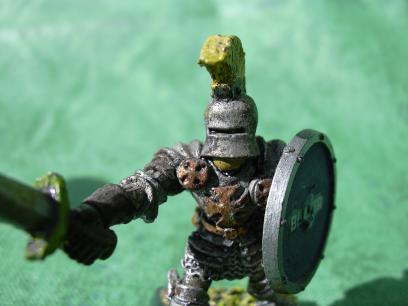 I've always used inks, more or less successfully. But an interesting period was when I used inks almost exclusively. I forget where I read about it, but I started experimenting with putting ink washes over bare metal. This is a really neat technique, if I say so myself, and works perfectly with knights in shining armor and similar subjects. It does take some patience, though, as you need to build up successive washes to really bring out the effect - this is not a dip'n'go method to quickly mass produce miniatures.

Naturally, you can't do everything with this technique, so it remained a sideline that started in the late Bronze Age and continued well into the Diesel Age.

I would like to say these paints blew me away and I never looked back. But that wouldn't be completely honest. While I did really like these paints, I did have a small problem with them peeling without varnishing and for a relatively long time, I still used Humbrol enamel varnish even though everything else was done with acrylics.

Then I ran out of Humbrol enamel varnish, and never opened another pot of enamel again. 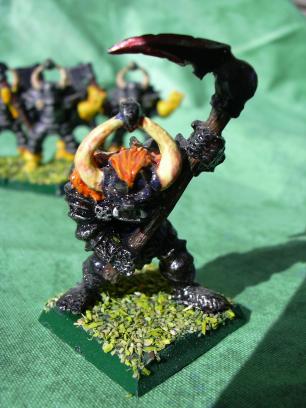 The early Citadel acrylics were great paints - for the most part. Some colors were watery and problematic, but on the whole the range was great. I still have and use some pots I bought in this period, over 15 years ago. I learned to do washes, my drybrushing improved - and I leveled out. While I may have learned a few tricks over the years, my painting quality has not improved in a substantial way since.

Distinguishing Marks: Bare metal blades. Around this time I bought a book called Heroes for Wargames, where I learned the trick of doing shiny blade edges in... bare metal! Another simple yet effective trick involves painting the blade with a dark color and then scraping the paint off the edge of the blade. Silly slogans painted on Sci-Fi figures, mainly with calligraphy inks. 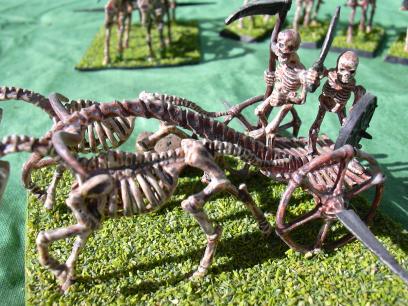 This is a very long period, actually. I gradually switched to Miniature Paints brand of acrylic paints, mainly since they were cheaper than Citadel and as far as I could tell, of similar quality. There really isn't much difference with the Steam Age technique-wise, except that I had less and less time for my hobbies and I got less and less experimental.

There was also a rather lengthy foray into plastic kits during this period, namely mecha, tanks and fighter jets. For a couple of years I actually painted very few figures.

Distinguishing Marks: Naturalistic period. All leather items painted in 'leather' colour, all wooden items in chestnut brown and so on. Rarely used the 'chocolate brown' color because I had no miniatures of chocolate to paint.

Interlude: The Rise Of The Spray Varnish 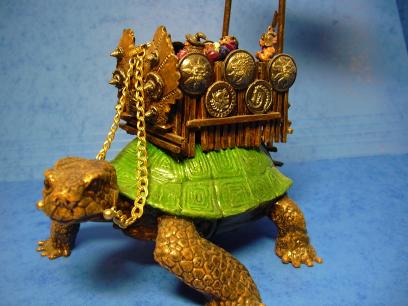 I had heard of bad experiences with spray varnish and consequently swore by brush-on varnish for a very long time. However, that was to change due to two things:

First, when I was painting my War Turtle conversion, I discovered that my varnish made the inks run despite several days of drying time. I repainted the damn thing at least three times. But that was an exception rather than the norm, and might have been related to the fact that the turtle was based on a vinyl toy. 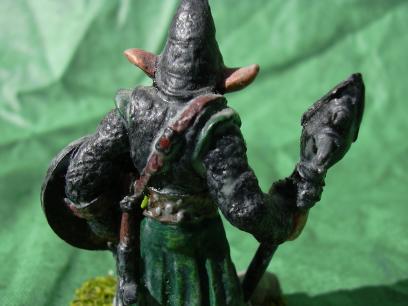 But the real killer came when I was quickly preparing figures for a con game - this was RopeCon 1997 if I recall correctly - when I hit a bad batch of varnish. Once dry, it clouded up real badly, destroying my prized Red Redemptionists and several other figures in the process. After recovering from this disaster, I swore off brush on varnish and have used spray varnish ever since.

Ironically, the only problem with spray varnish I've ever had is that I sometimes spray it too heavily - even though I always use the cheapest brands from discount bins.

The Dark Age: The Hanging Up Of The Brushes 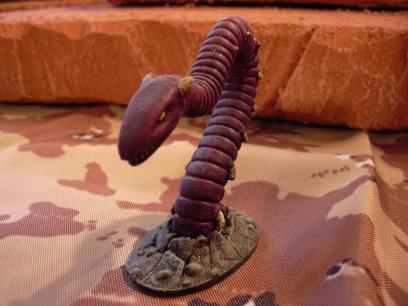 Due to reasons detailed elsewhere, I practically gave up painting for a couple of years. During this sad period in my life I didn't really manage to paint anything. The figure you see here is one of the few exceptions, one I painted mainly to get it off my desk.

Distinguishing Marks: Little or no production.

Figures: None to speak of.

Welcome to the present day! After getting back into painting I delved deeper into historicals, which, thanks to the Internet, were much more accessible than they used to be. The thing with historicals is that while they are individually cheaper, most rules require amounts of figures that seemed simply megalomanic to someone coming from a RPG background like me.

I should note that I've been interested in military history and gaming for quite a long time. In fact, I was gaming historicals before I was gaming with miniatures. It's just that historical miniatures were largely unavailable, confining my gaming mostly to computer games and the occasional boardgame, though in general I hate cardboard chits. 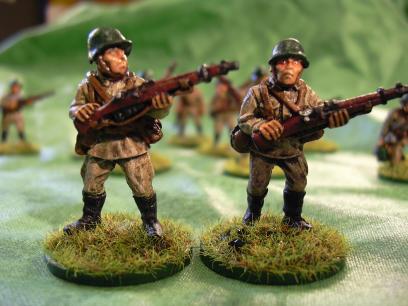 Thus, I started buying more stuff. And, faced with a growing pile of lead, I started painting more. It took some learning to adopt mass production practices, but in the end I shaved 2-3 hours per figure down to 30 minutes per figure for simple ones, with no apparent loss in technical quality. It is not just a question of doing several similar figures at a time, I also streamlined my painting process. I used to wash and drybrush everything, even small items such as belt buckles. I dropped drybrushing small details.

Once I heard that John Blanche had replied to a man asking how to learn to paint like him: "Easy, just paint 10,000 figures." While I might not completely agree, it is true that practice hones your techniques. Whether you actually learn anything new by simply doing the same thing over and over again is another thing.

However, in my case I have to say that increased confidence in the basic process of getting a figure painted also gave me more confidence to experiment more. I started doing patterned cloths (I especially liked Foundry's Darkest Africa explorer ladies, because their dresses were basically carte blanche to do anything I liked and lots of surface for it), constrasting trims and so on. I got some Foundry paints (love the flesh palette), bought a bunch of Vallejo (didn't like), experimented with Winsor & Newton tube acrylics (great for terrain, sucks for figures), tried the Foundry 3-color system but couldn't do it...

The feedback season is over. The final score reads:

Even though the voting is closed, feedback is still valued. Should you wish to give more wordy feedback, you can use the comment button below, or visit the feedback page.

If you think you deserve more punishment, you could go to the photo pages.