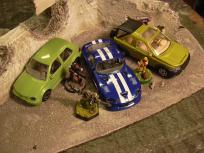 Vehicles are an essential part of modern and science fiction gaming. Even if they are not actually driven in the game, cars are an indispensable part of an urban landscape. Who'd believe a street with no parked cars?

While there are vehicle models to go with the figures, they tend to be expensive and selection is limited to military vehicles mostly. However, toy cars are made in a variety of scales and can be had for cheap. Could they be the answer to this dilemma?

Assuming a 28mm tall model is supposed to represent a roughly 6 foot tall man, that would translate to a scale of 1:64. Just find cars in 1:64 and you're done, right?

The problem is that a 28mm figure is not a scale model of a human being. Like it or not, but the modern style of 28mm figures has modified proportions -- namely, they are wider and bulkier than their height would suggest, and certain features like heads and hands are exaggerated.

A 1:60 car next to a modern 28mm figure just looks silly, as this picture shows. Even though the height scale might be correct, the figure would never fit in the car and frankly they look silly standing next to each other. 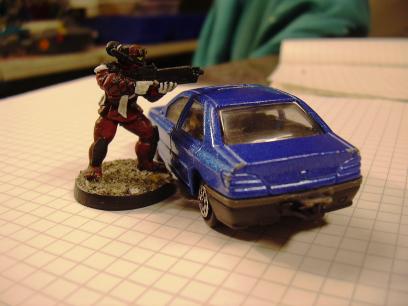 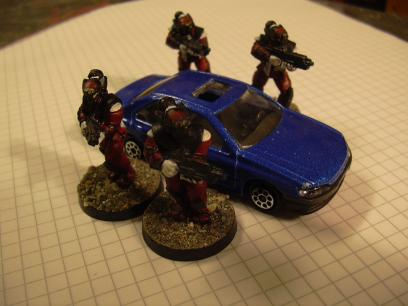 The ideal solution would be to have vehicles done in the same style as the figures. While some manufacturers do offer vehicle kits, they are expensive and usually cover only military subjects. Who wants streets parked full of APCs? 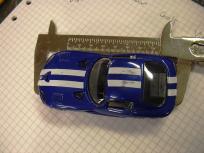 Since the figures don't conform to a real scale measure, the suitability of vehicle models can not be determined with a simple calculation. One must actually compare the vehicle models and figures.

There are two primary considerations for this: How the figures look standing next to a vehicle model, and how they'd look inside the vehicle model. Is there a figure scale that would look reasonable in both cases?

Luckily, 1:43 toy cars are readily available and reasonably cheap. Simple arithmetic tells us that a scale human should be about 42mm tall. However, given the above consideration, maybe there is hope for 1:43 after all.

We start with picking three random sample cars from my son's collection and checking their scale accuracy, as sometimes toy cars are not really the scale they claim to be.

Overall, the scale accuracy is reasonably good, but the Golf has clearly been puffed up a bit to fill the box better.

For three cars, we pick three men. This does not imply that female figures couldn't drive (none of them can, they're too leaden), but there is often a very profound difference in the stature of male and female figures, where the latter can be described as "silicone-enhanced anorexia". Not that the muscle-bound physiques of male figures are very realistic either, but at least they tend to form the majority of tabletop troops. The occasional willowy female can blend in, but if vehicles don't match the bulk of the troops, it's going to get noticed.

It should be noted that the bases do make a difference. A "standard" slottabase is about 5mm thick, giving the figures a bit of a boost to see over fences, walls and ofcourse vehicles.

A normal man should stand roughly head and shoulders above a normal car. The car should be roughly as wide as a man is tall and twice as long. There is some fudge factor involved, but too large a divergence becomes readily apparent from too far away.

Looking at the sample cars, a normal man should be just about level with the Land Rover, able to shoot over the Golf and jump on top of the Viper. 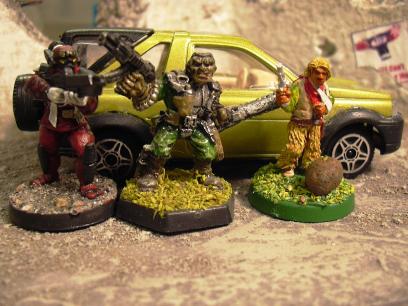 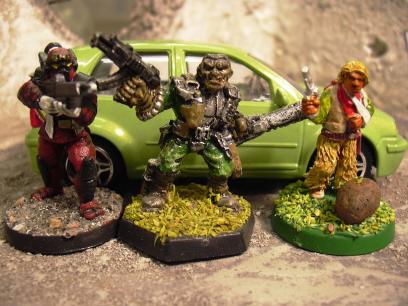 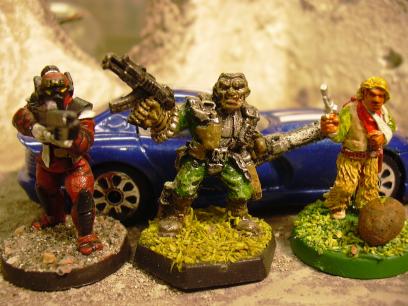 As these pictures tell, the cars are a bit too tall. Even with the thickish slottabase, none of the figures really looks like it could fire over the Freelander or the Golf. With the Freelander this is okay, but the Golf is really too tall -- but then again, its height scale was off anyway. The Viper looks perhaps a tad too tall, but not off by that much.

This discrepancy is less apparent the farther away the figures are from the vehicles. 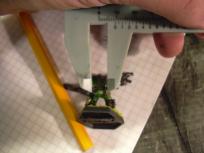 What's the point of having a car if you don't drive it? While you can't usually put your figures inside the vehicles, will it look like they could if the wanted to?

To check this, we introduce a new measurement: Butt Width. Butt Width measures whether the seats are wide enough for the figures.

The seats are a bit tight, especially on the sporty Viper, but figures look they might be able to squeeze in. If there are no actual crew figures to compare against, the scale difference is not immediately apparent. 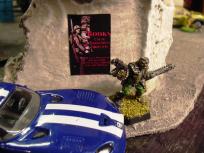 While 1:43 toy cars are not an ideal solution, they provide a workable low-cost alternative to 1:48 models. Ironically, the high slottabases help alleviate the scale differences.

It seems that the worst problem is actually the scale inconsistency in the cars themselves. Despite being advertised as specific scale, their actual dimensions seem to vary according to the time-honored toy productions logistics maxim: "whatever fits in the box".

P.S. If you liked this, you might like my newer piece on Viability of OO Scale Buildings in 28mm Gaming.