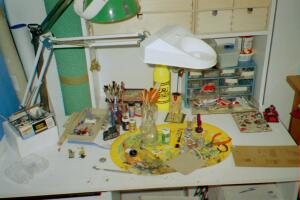 First of all I must say that 2004 was probably my most prolific painting year ever. It is also the best documented year, since I started writing the diary entries in late 2003 making 2004 the first year with complete entries.

Unfortunately my log database isn't very versatile, there is obviously room for improvement there. However, I offer these following tidbits of information:

I paint a wide variety of different items, mostly in 28mm scale though, so it's not so simple to count them. A cavalry trooper with his horse might be "worth" two infantry, but how much is a tank or a hill? The only way to make a nonambiguous number out of it is to count everything as one, i.e. one painted item is one painted item, no matter how big or small, how simple or complex it is.

Counted this way, these are the final figures for 2004:

Again, the classifications are sometimes a bit arbitrary, but that's life. I was actually slightly surprised by the high number of terrain items painted. And it's not because I counted every pebble separately.

Painting by Day of Month

This is not very useful, but it was relatively easy to extract. The following shows which days of month I've made diary entries in.

Initially, I intended to have a competition question "which day of month I did not do any painting?", but as you can see, that would have been a trick question.

While this does not give the number of models actually finished nor the actual time worked, it's a useful metric to see when I've been at it. It shouldn't take a genius to figure out when I had my vacation...

The competetition results were most interesting. In the two months of 2003 that I had kept the diary, I had finished a total of 31 miniatures. If you extrapolate from that, you should arrive at a yearly rate of 186 figures finished. One person had guessed 187, so perhaps the scientific method was used, but mostly the guesses were much larger.

Another clue I mentioned was that I had 195 painting days in 2004. The largest guess was 2479. That makes almost 13 figures per day. I 've mentioned somewhere that I've managed to squeeze the painting time on simple bulk infantry down to 30 minutes per figure. At 13 miniatures a day, that would translate to 6.5 hour days, which is getting pretty close to a full workday if you figure in a bit of administrative overhead, more time spent on complex models etc. When I said painting days, I didn't mean quite that.

Normally I work maybe an average of two hours per day. That translates to almost 400 working hours and should translate to 800 finished figures. No such luck, even though there are two guesses in this neighborhood. In real life, you don't just clock the time from start to finish line, you also need to account for the time to tie your shoelaces, time get to the track etc. And the 30 minute figure is for extreme assembly line painting anyway. 45 minutes to 1 hour is a more realistic value.

Here's a summary of the answers. Judging by the average, I guess I've been too lazy. Sigh...

Here are the guesses plotted out:

But the most interesting result was rather surprising: Only 31 people thought that a box of free Ral Partha figures was worth filling in a simple form. Go figure...

And The Winner Is...

Small Cuts congratulates the winner, "Probert", who beat the opposition with and uncannily accurate guess of 479.

We've managed to get the lucky winner to share some his secrets with us:

Well, I just tried to think about how many quality guys I could produce in a year. I then looked at the quality of my work versus yours, and it seems like you put a little more time in than I do, but it also seems like you paint more than I do. I put my own figure at 360 25mm/year if I'm not fired up. You seem more fired than me so I added 100 and then I fixed the number to a weird amount. 479. It did not seem likely that you stopped at a round number.

Since you wanted a few words I can let you know that I am currently painting 30 Old Glory Wild West minis. In my "to do line" I have a couple of platoons of Stargrunt figs, a Renegade Orc, a 28mm Modern Italian infantryman and an entire WWII 15mm Italian Fucilieri Company. But the little dwarf types might be able to cut in.

I am only human. Sometimes I forget to make diary entries, sometimes they're not quite correct. When I entered the data into the database, I corrected the mistakes that I could see, but I still doubt it's 100% accurate - should such a thing exist in the first place.

In the words of Psychic Hotline, "This service is provided for entertainment purposes only."