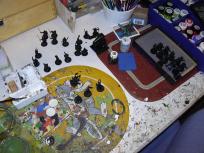 2005 was certainly not the blockbuster 2004 was, but I was actually surprised to see that my output hadn't fallen quite as badly as I had thought.

I work mostly in 28mm, in pretty much all eras except Napoleonics. Rather than trying to figure out an abstract "infantry-equivalent" value for a Hive Tyrant, I count everything as one and divide them into broad categories.

Counted this way, these are the final figures (pun intended) for 2005:

Still no cavalry! And all the trouble I went to a couple of years ago to buy that book on horses! Pretty much the only thing I have good reference material for, and I don't paint any. Go figure... 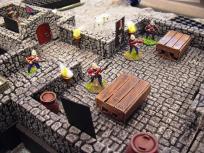 The high proportion of terrain is due to two things mainly. First of all, I transformed a pile of styrofoam sheets I got for free into hills. But the more important reason was the Castle Chelsmford 3-D project I did for RopeCon. An entire modular dungeon and furnishings built from scratch. 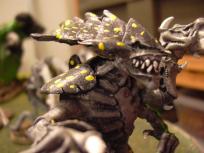 There is a huge drop in the amount of infantry figures produced. This is partly an after effect of the huge crunch I had for finishing my celts in 2004 and the slight painting burnout resulting from that. Partly it is to be attributed to concentrating on Warhammer 40,000, first finishing the Battle for Macragge and then my Tyranid army. While the tyranids are a mass army by 40K standards, the bigger models are a fair bit more complex than churning out naked celt warriors by the dozen and even with the smaller fry the assembly work takes a fair bit of time compared to single-part metal models.

There are two main thing to note from this graph. First is the obvious drop in productivity towards the end of the year. There is no major fluctuation in the number of work days (apart from December, when the SA-INT felt it necessary to dump me in a forest far away from my brushes. A matter of national security, I'm led to believe.

Ok, so September was a bit slow too. But I did manage to catch 20-odd movies at Helsinki International Film Festival. 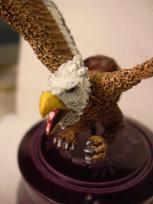 Apart from yet another burnout resulting from the Chelmsford stuff, the fall was marked by concentrating on the larger tyranid models which took considerably longer to finish than your average infantry trooper in a simple tunic. What little time I could get in December was committed nearly totally to Project Hippogriff, since this one had a fairly inflexible deadline.

The other interesting thing is the cyclicity of the finishing rates, most apparent in the first half. A slow month is followed by a productive month. Even though there is no major change in the number of work days or even the finishing days, the amount of finished stuff doubles or even triples.

This is probably a result of working in large batches. The whole month could be spent working on a batch and only finishing a few odd items on the side. Then the batch is finished and causes an apparent spike in productivity. Again, the Chelmsford effect is visible in July numbers - without a hard deadline forcing me to concentrate on the absolutely necessary stuff, I probably would have finished most of those miniatures in August.