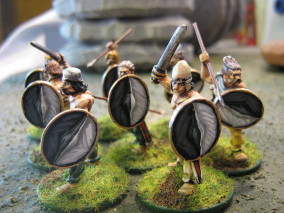 Holy fruit salad, has it really been that long? Well, yes it seems. To be quite brief about it, I basically didn't do any painting during these years apart from some rather abortive attempts.

My gaming group sort of disintegrated and I had some other things on my mind. I tried to paint every now and then but it just wasn't a part of my normal routine anymore. Therefore I might do something for a batch of figures and then leave them be for three months or something.

I finished my celt cavalry and the freebie warriors in the spring. Ironically, I think these are some of my best work ever. Now after years of non-use, the skills I worked at least slightly hard to achieve are largely gone and forgotten... 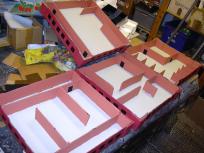 Also did some terrain for a project inspired by Kane & Lynch tentatively called "The Heist". Unfortunately, that also bogged down. 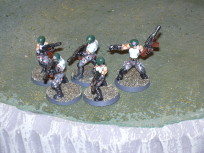 Didn't do anything in the spring, then finally managed to dip a bunch of zombies. Also started on some modern figures for The Heist but that's about it.

Early on I finished the cops and some furniture for The Heist, but then lethargy hit again. Actually it is supposed to be a low figure count game, so I really should have been able to get that going. But since I really didn't have anyone to play with, that stagnated too.

The fall was actually something of a restart. We had started playing Dungeons & Dragons with the kids and despite my very old collection of RPG figures, I started painting new ones. Only some dipped orcs saw the light of the day (or the dungeon, as case may be). 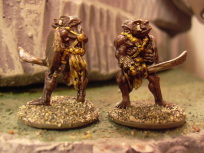 More RPG-related painting, dipping orcs by the dozen. These were the 10-cent orcs from I forget where... I also painted a small sampler force of 15mm WWII Germans and didn't completely hate it. Given the deterioration of my skills and the smaller scale it was easier for me to accept a "table-quality" paintjob... oh heck, who am I trying to kid? It's crap painting, that's what it is. Still, it's an honest attempt, which really can't be said of the pure lead legions and primer brigades prevalent in many circles.

Unfortunately during this period, I grew lax with the photographing and therefore miss some pictures of finished figures. I quite honestly have no idea in some cases which figures the diary entries are really referring to...

The numbers are also somewhat artificially boosted by me finishing some 30 zulu warriors a friend had left lying about half finished years ago. However by the end of the year I had grown tired of playing AD&HD instead of AD&D and shut down our RPG game...

A whopping twelve figures finished all year? What can I say? Well, I did work on my Flames of War Americans, just didn't get any finished. That's the problem with working on too big batches -- you don't get anything really finished for months...

These are the final figures (pun intended):

I'm not going to calculate this, because it would just be too embarrassing.