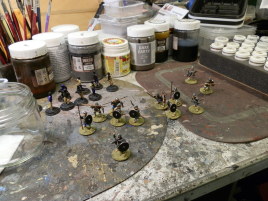 We're back with a record breaking result! In addition to painting, I have also played more miniature games this year than probably ever before. This is mostly due to joining (and actually going to) a local gaming club. Previously, I've been pretty much the only person really into miniatures gaming and I had to drag everyone else into it more or less kicking and screaming. It's a really nice change to play with people who will paint their own figures and having regular scheduled games motivates me to do more stuff.

I used to work mostly in 28mm, but this year I did a very sizable 15mm force, mostly for my Vietnamese but also a few additions to my WWII Americans. As usual, everything still counts as one. Stuff is divided into the same broad categories as before. A couple of artillery items got arbitrarily classed as infantry (I thought about lumping them with vehicles which might make sense for a howitzer, but a mortar?).

Counted this way, these are the final figures for 2012:

Something in every category, even though monsters are very few and the cavalry are actually all just pack horses. In case you were wondering, over 500 of the infantry are actually 15mm. Yes, I do feel a little dirty... though this isn't completely unprecedented, I've done microscale projects before. 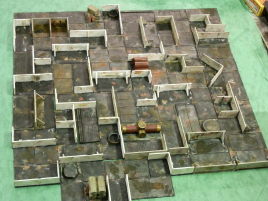 Quite a few of the terrain items are from the steam tunnel tile set I did but the rest of is not just some shrubbery either. The big ship is counted in the vehicles even though it's really more terrain.

I also finally finished my "other color" terrain boards so now I have the typical green boards, reddish "Martian desert" boards and bleak grey "moonscape" boards. A sandy color would probably have been more useful, but I don't have any hills to go with it.

I also did maybe 20 buildings of various types and some furniture and smaller items. But no giant batches of shrubbery. 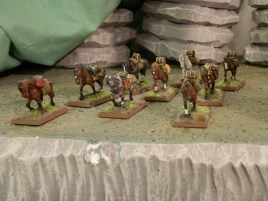 The less I have to use Excel, the happier man I am. Therefore I decided against doing the graph I've done previously. A quick peek in the database reveals that I painted on 178 days and actually finished something on 52 days.

Work is pretty evenly spread, discounting July when I was abroad for most of the month. Activity is slightly sparser during summer months, but this is also expected. Even though it's not directly visible, there are relatively few unfinished projects on my work bench. 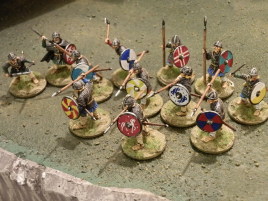 Speaking of projects, I implemented a slightly more formal way to do painting projects. While the projects page details these in more detail, here's a short recap of activity in 2012: