This section covers 20th century and beyond.

Everything here is in 28mm unless otherwise specified. 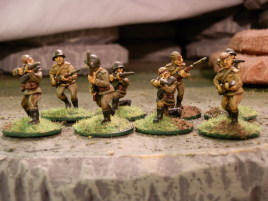 I got most of these in a big exchange deal from Black Tree, which was nice enough. The tanks and artillery are genuine Russian diecast toys... would be nice to get some arty crew figures though. 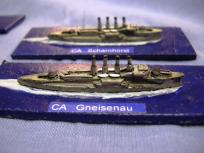 This is my Foreign Stations project. It includes every British and German vessel not stationed at home port at the start of the war. Plus a few that were due to multi-packs etc.

This is the humble beginnings of my large scale WWII naval force. The core is based around Revell 1/1200 plastic kits but I'm planning to supplement that with others. 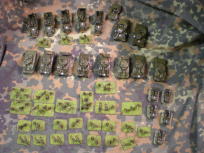 These are all based for Flames of War, one of the rare occasions when I have followed the official basing scheme of any rules. Usually I approach most subjects "figures first". 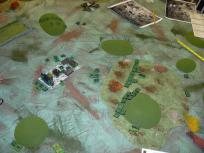 Yes, I did not count the individual infantrymen. Basic riflemen are based five to a base, crewed weapons with less. Looks like I don't have any closeups of these figures... there are a few individually based for playing Crossfire -- I didn't count these.

This is essentially a test batch I did once. I like fighters and especially the Pacific theatre, but haven't found good miniatures rules for them. 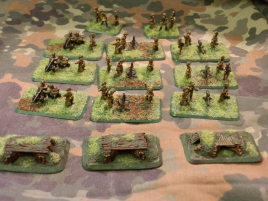 These are all based for Flames of War, though I've also used them with Cold War Commander.

Since many of these are usable for multiple conflicts (like the BTR-60s), I decided to combine all post-WWII stuff into one section.

I got these as a sample some time back, but never really did anything with them after painting them. Yes, the picture has nothing to do with Panzerfauste. Apparently I never photographed these figures. 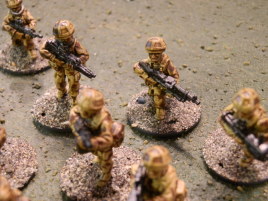 This is basically post-WWII stuff. The zombie soldiers are actually Warzone figures, but they got lumped here with the rest of the modern zombies. 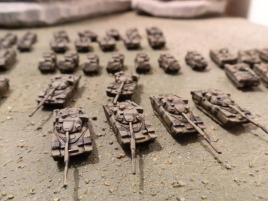 All post-WWII micro armor lumped into one.